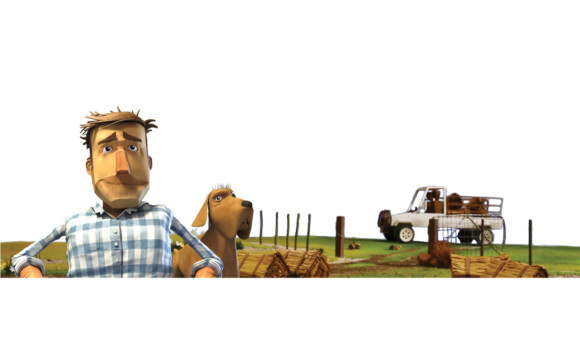 Old MacDonald has a farm

Here it is! Our new TV ad tells the story of how Frank’s passion for farming started, how he used technology to provide food to more people, and how GWK supports him every step of the way - like we do for every South African farmer. I am, you are, #WeAreOldMacDonald.#OldMacDonald#ProudlyGWK#InnovateAgriculture

Four years ago, GWK’s animated TV advertisement acknowledging South African farmers and other people in agriculture for the work they are doing to feed the nation, was awarded one Loerie and three Pendoring advertising awards.

Now, GWK is proud to release the follow-up animated film, Old MacDonald Has A Farm, which promises to leave an even bigger impression on South African viewers.

In 2015 GWK shifted the public’s focus towards farmers by telling the story of South African agriculture and the amazing work these people do. They did this with an animated advertisement, This Man Is Building A Rocket, which told the story of Frank, the farmer, his son, Frikkie, and their dog, Flip.

The message was clear: Farmers are building rockets, because without them, the rest of the world (like scientists) won’t have the food to feed their minds to build rockets or do the work needed to build a better future.

This year, the world is introduced to Old MacDonald, Frank’s father. Old MacDonald Has A Farm gives insight to where Frank’s passion for farming was born, how agriculture has changed over time, how technology has changed the world of food supply, and how knowledge is exchanged between generations.

GWK has partnered with the agency MullenLowe and animators Bewilder TV, with the support of John Deere Financial and Valley Irrigation, to create this heartfelt, creative, animated advertisement as a tribute to every person working in agriculture.

Neil de Klerk, executive head of GWK Group marketing and communications, compares the approach to the new film to farmers improving their yields. “How do you improve something that is already great?” he says about the follow-up advertisement. “That is what farmers are faced with daily. Also, both advertisements were produced by local talent, which is something we can be very proud of.”

De Klerk says being awarded for the first advertisement was an honour for GWK and its partners in the project, “but the reaction to the advertisement from people from all walks of life was really special and dear to us. We hope the new advertisement will also speak to people’s hearts.”

Kirk Gainsford, MullenLowe’s creative director, confirms that the success of the first advertisement made the production of the second one both terrifying and exciting. “We knew we couldn’t make something as good as the last one, we had to make something better.”

“After we received the new storyline from the agency, it has taken us two years to develop the new set, characters, farm and props,” says Ruan Vermeulen from Bewilder about this enormous project.

The story unfolds over 90 seconds using a combination of different animation techniques, including stop-frame.
“This project is dedicated to every person working in agriculture to ensure a better future for all of us,” says De Klerk.

Old MacDonald Has A Farm is launched on GWK’s social media platforms on Friday, 27 September. The first TV screening will take place during the first episode of the new programme GWK is part of, called Ons Boere, Ons Inspirasie, broadcasted on kykNET starting 3 October.